After making scenic Eastern Front bases for 6mm Rommel, I really wanted to have a go at doing jungle bases. However, Adler didn’t do 6mm Japanese (and I didn’t like any of the other manufacturers), and there was no Far East supplement for Rommel anyway. Company level WW2 got a bit of a boost at the club when we started playing Battlegroup, and there was 14th army opposition in 15mm, so the concept got relocated to 15mm IJA for Battlegroup.

With no sourcebook for Battlegroup Pacific out yet, it wasn’t apparent how they’d break down the IJA platoons. In the end I decided on bases of 3 figures each (a ‘han’) and have 4 such bases per section (buntai) with a single based figure to bring the number up to 13. Single figures could be used to make the figures Chain of Command compliant too. So that was the basic idea. 40mm square bases for the multiple figures and 1p or 2p bases for the singles.

I ended up using a wide variety of stuff to fill up the bases. But the basic surface would be static grass applied with an applicator. I went for a different basing style for each section, with a view to expanding those sections into platoons later on. This would help differentiate them without having markings on the base (which I try to avoid).

Right-click and open in new tab to see bigger pictures. 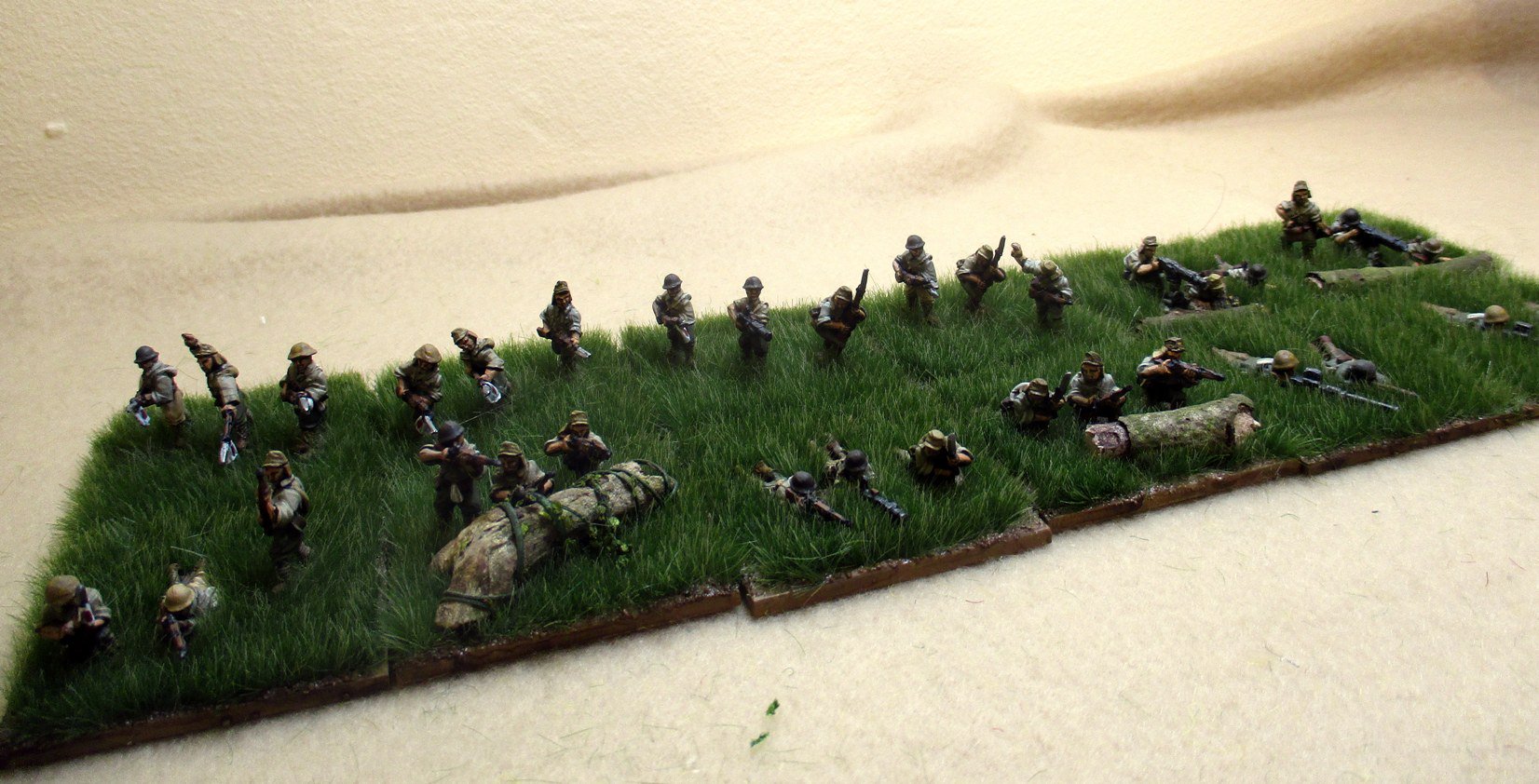 These bases have 4mm static grass (Mininatur early fall). A few twigs found while walking the dog are put on some bases, and I had some model railway ivy stuff which wasn’t very good as ivy but made passable creepers. 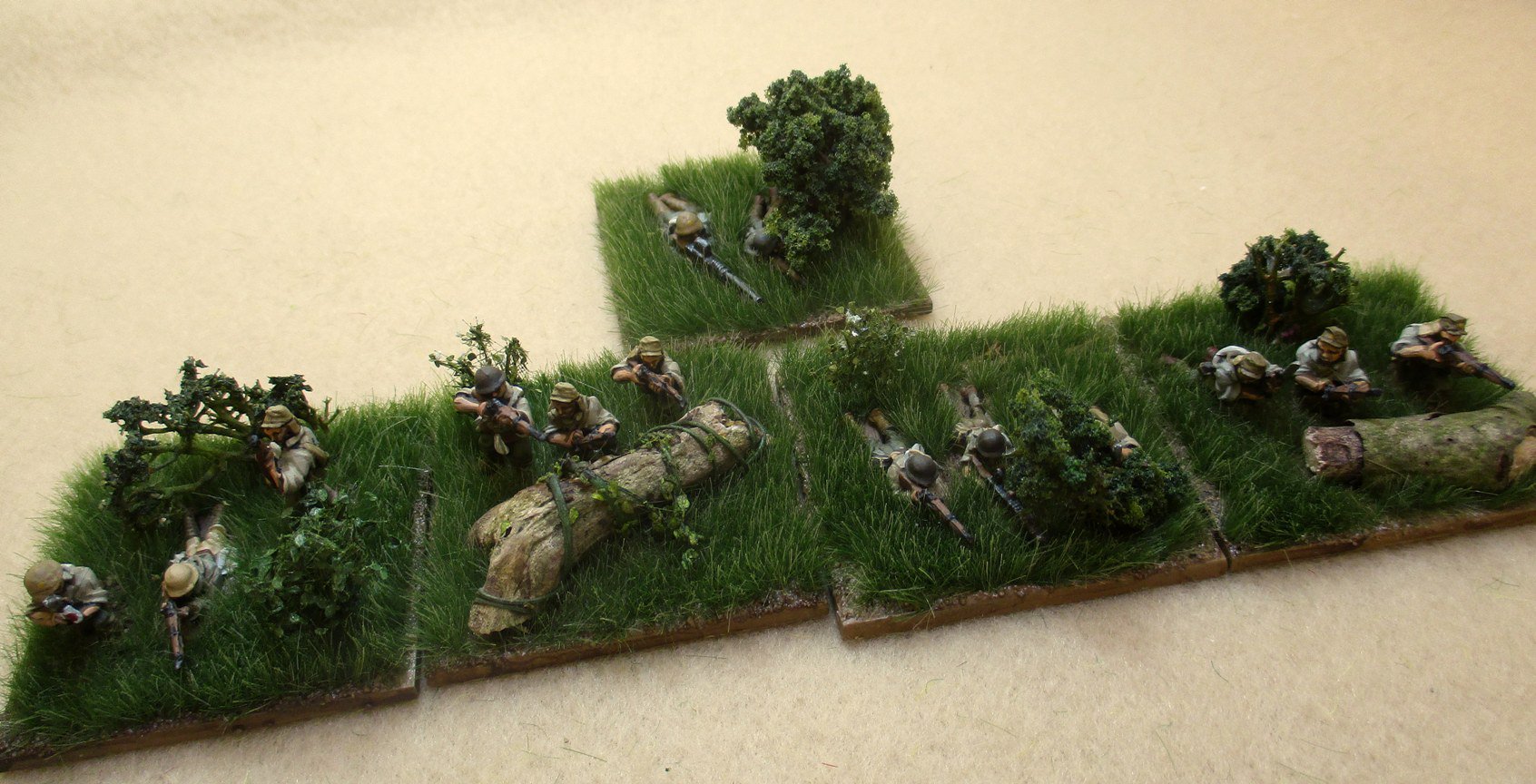 Now some bushes are added. Some of these are mininatur flowers with the flower part cut off. There are also bushes made from lichen and clump foliage. For these, the lichen is soaked in PVA to toughen it up, then it’s painted brown and then clump foliage is glued on top. Lichen is so familiar-looking to people, that I think you need to disguise it. But after being soaked in PVA it makes for excellent branches. Afterwards, the foliage and the other plants have drops of a mixture of PVA and water (with a tiny drop of washing-up liquid to break the surface tension) applied to make the plants more solid. I use an old Vallejo paint pot for this. This lets you use plants which would otherwise be too fragile.

Some machine gun bases. The wooden poles here are from a Chinese tableware place setting thing, which is made of wooden sticks that are wider than cocktail sticks but smaller than bamboo skewers. The leafy plants are cheap things from China via Ebay. Some of these are a bit big for 15mm, but can look OK amongst other bushes etc. These are painted to remove the plastic look. 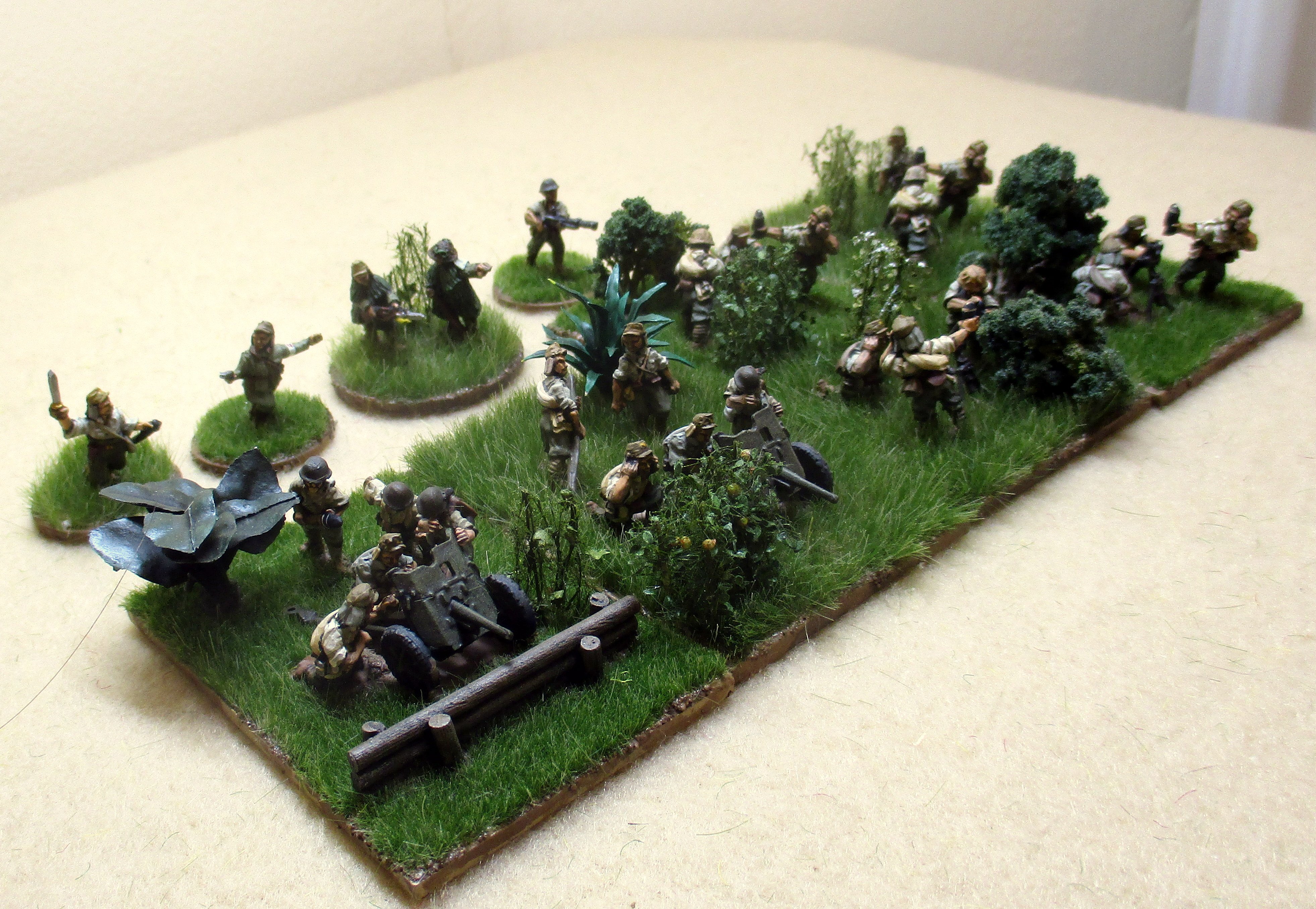 Guns and mortars etc. The wide-leaf plant is another plastic one. Probably too big, but not too bad if you view it in the context of the base as a whole. 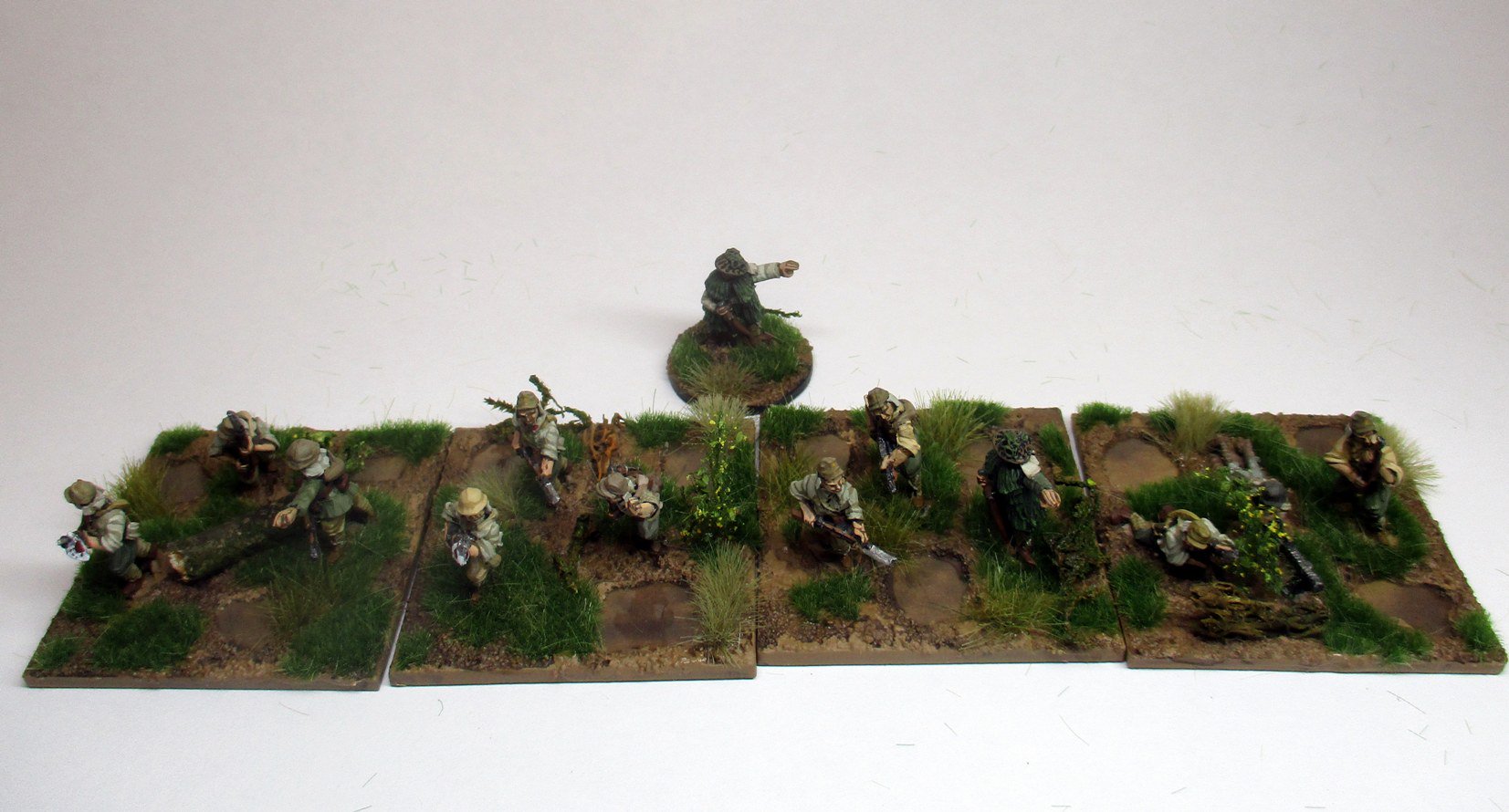 These are swamp bases. Here the base is painted a muddy brown and clear acetate used for the puddles before the terrain is added. More twigs, lichen and flowers complete the bases. 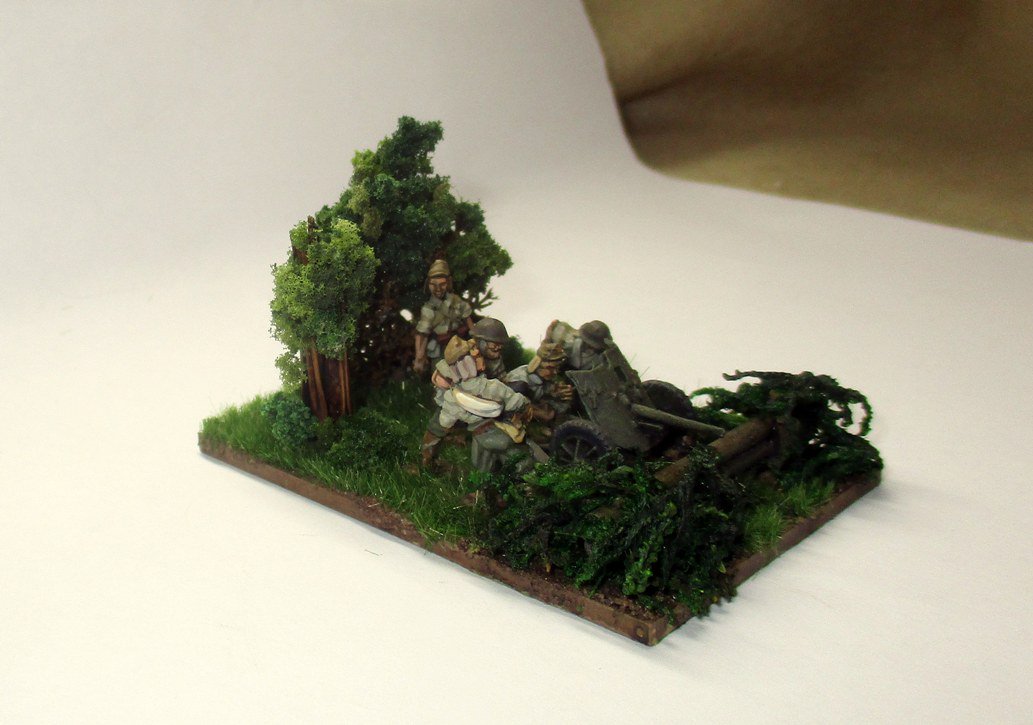 Another log defence part covered with some synthetic reindeer moss. The shrubbery at the back has one done with foliage over toughened lichen and the other has stiff bristles from a sweeping brush for the branches. Again, all this is given a coating of PVA and water.

An IJA platoon. 3 rifle sections and a grenade discharger section. The themes for the rifles are ‘long grass’ ‘short grass’ and ‘swamp.’ 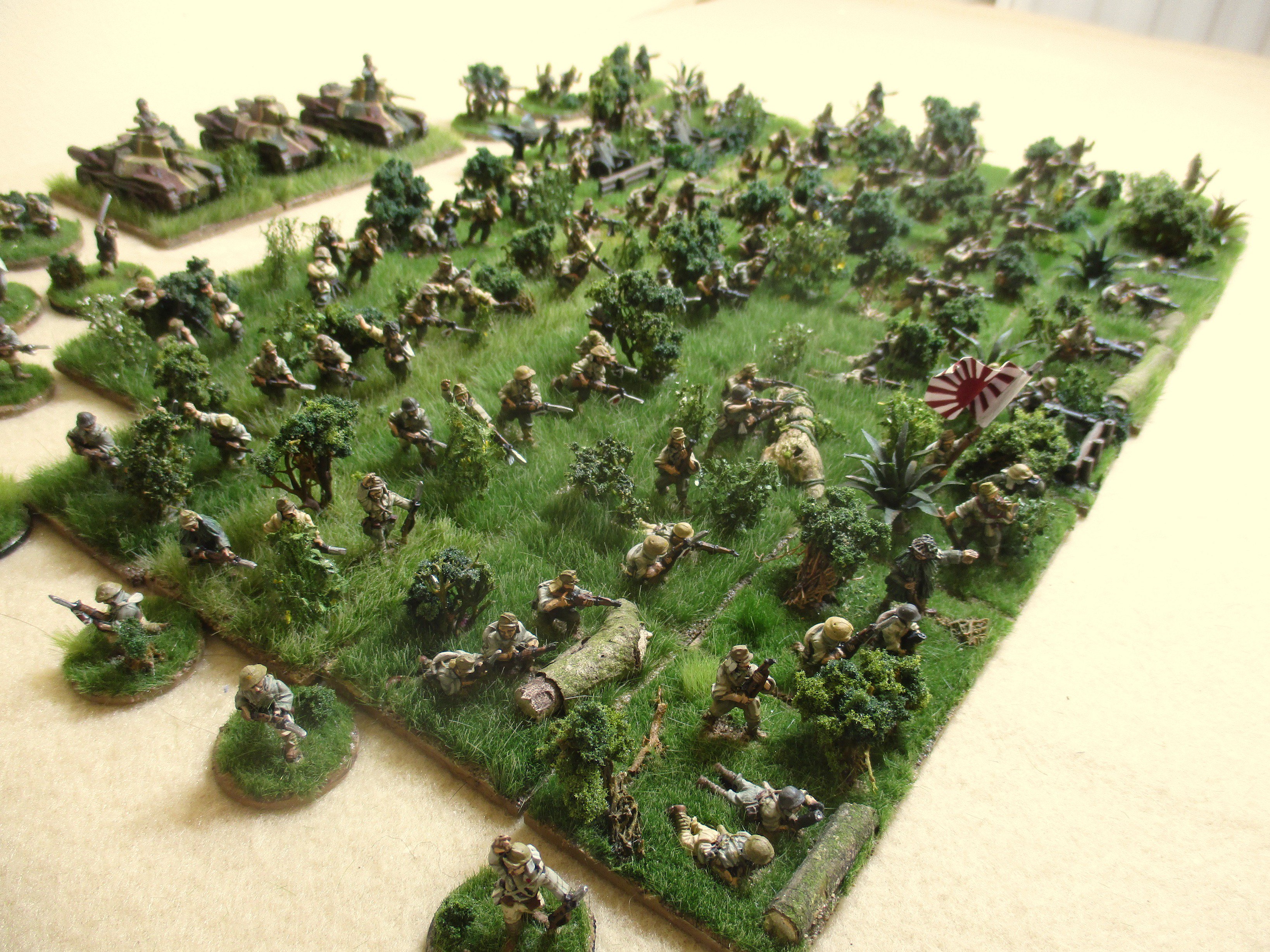 The bases all together with a few Ha-Go tanks in the background.